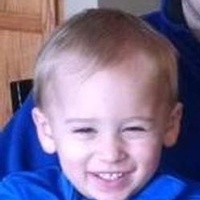 Theodore “Ted” Nate McGee, age 22 months, died unexpectedly February 14, 2016. He was born on March 26, 2014, in St. Paul, the son of Jeremy and Janet (Daniels) McGee. Ted was baptized on August 9, 2014, at Hosanna! Lutheran Church in Lakeville. In his short life, Ted brought immense joy and love to his family and friends. He loved to watch sports with his daddy and enjoyed playing with his brothers, especially rocking out to music. He liked “reading” books and coloring, as well as playing with cars, trains, and bubbles. His greatest moments in life were being with his family and playing with his partner in crime, the family dog, Chloe.

Funeral services are at 11 am on Saturday, February 20, 2016, at Hosanna! Lutheran Church, 9600 163rd Street West, Lakeville, MN. Visitation one hour prior to the service at the church. A spring interment will take place at Arco Cemetery in Arco, MN. In lieu of flowers, memorials are preferred.