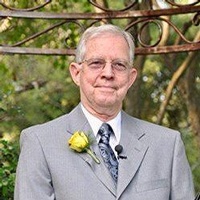 Allen Billy (Bill) Crider was born in Mexia, Texas, on July 28, 1941, and departed this life on February 12, 2018. Bill grew up in Mexia, and was valedictorian of his high school graduating class. He attended the University of Texas at Austin and graduated in 1963 with a BA in English. In 1965, he married Judy, the love of his life, whom he met on a blind date. Bill went on to attend graduate school, first in Denton where he earned an MA in 1967 at North Texas State University, and then in Austin where he earned a PhD at the University of Texas in 1972.

Bill taught English at Howard Payne University in Brownwood, Texas, and went on to become the Chair of the Division of English and Fine Arts at Alvin Community College in Alvin, Texas. In addition to teaching, Bill’s passions included reading, writing, book-collecting, music, movies, blogging, and cats. Bill was a prolific writer of mystery, science fiction, western, horror, and children’s books, not to mention short stories, articles, reviews, and blog posts. He was perhaps best known for his Sheriff Dan Rhodes mystery series, the first of which won an Anthony Award for Best First Novel. Bill made a significant impact on the genre of crime and mystery fiction, and was an avid supporter of his fellow writers.

Bill was a member of the First United Methodist Church of Alvin and will be dearly missed by all who knew him. He is preceded in death by his wife, Judy Crider, and his parents, Billy and Frances Crider. Bill is survived by his daughter, Angela Neary and husband Tom; son, Allen Crider; sister, Francelle Bettinger; brother, Bob Crider and wife Pam; and by a host of other relatives and friends.

A memorial service will be held at 1:00 p.m. on Monday, February 19, 2018, at the First United Methodist Church of Alvin, 611 W. South Street Alvin, Texas 77511. In lieu of flowers, a donation to a library of the donor’s choice would be appropriate.