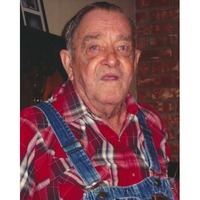 Billy, 82 years of age and a resident of Robeline, passed away on June 1, 2020.  He was born on December 15, 1937 to Dewitt and Imogene Welch Stoker in Robeline, LA.  He was preceded in death by his wife, Glenda Sue Woodel Stoker; his parents and siblings, Virginia Odom, Byron Stoker, Bobby Stoker, and Don Stoker.

Billy was a hard worker and a good provider for his family.  He worked for many years in the oil and gas industry as a roughneck.  During his free time he enjoyed being outside especially hunting, fishing, and working in his garden and of course cutting hay.  He was a proud veteran of the United States Army and was honorably discharged in 1958 after completing his patriotic duty.  He will forever be remembered as a loving father and grandfather.

He is survived by his children, Whitt Stoker (Courtney) of Robeline and Callie Stoker Hammonds (Nick) of Natchitoches; grandchildren, Blayne Hammonds, Emma Hammonds, and Macy Stoker; as well as numerous nieces, nephews and extended family.