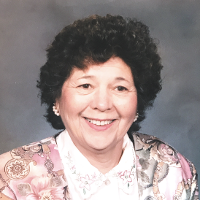 Mary Rose (Parisien) Morin, age 84, of Belcourt, ND passed away on Friday, August 16, 2019 at the Belcourt Hospital, Belcourt, ND surrounded by her loving family after a long battle with Lung Disease (COPD). Her family nickname was “Beans” because she was so tiny when she was born and fit inside of a shoebox.

Mary Rose was born on February 1, 1935 at the home of Fred P. and Rose Z. (Enno) Parisien in rural Belcourt. She had four siblings: Alice, Emma, May, and Albert. Her first language was Michif, which she only spoke until the age of 9. She learned English when she had to attend day school. She then came home and taught her siblings English. She attended school until she was called to care for her grandmother, Mary Enno. She was raised in the Catholic faith.

She was united in marriage to Clarence John Morin on November 4, 1961 at St. Ann’s Catholic Church in Belcourt. Together they had five children, Randall C., Sandra, Shelley, Sheila, and Radley. Clarence passed away at the age of 35, and Mary Rose raised their five children on her own. She enjoyed taking her children to many community and family events such as parades, county fairs, picnics, and most importantly instilled the catholic faith including attending weekly mass and religious education.

Mary Rose worked at the William Langer Jewel Bearing Plant in Rolla as a jewel inspector and retired after 22 years. She then worked as a para professional at the Turtle Mountain Elementary School in Belcourt and retired after 18 years. While raising her family and also working, Mary Rose decided to further her education by attending the Turtle Mountain Community College where she completed her GED and Associate’s Degree.

Mary Rose was an avid reader, reading anything from newspapers to magazines and books. She enjoyed going to the casino, playing bingo, working on crossword puzzles, and watch her soap operas. She loved to spend time with her grandchildren and great grandchildren. Each one held a special place in her heart.

She was a strong woman of few words, but wise words, and was a great listener. Mary Rose was a humble, kind, and friendly woman who loved telling stories and laughing with her family members and friends. She will be lovingly remembered and greatly missed.